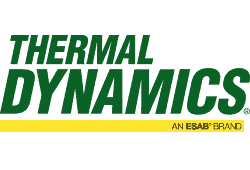 In 1953, James Browning and Merle Thorpe, college professors at Dartmouth (located in Hanover, New Hampshire in the United States), developed their first plasma spray torch, the F-40 in their garage located in Wilder, Vermont.  They then went on to found Thermal Dynamics, in 1957.

The pioneering work of James and Merle, focused on developing a high-temperature, electric arc metallising torch. This design created a flame twice as hot as the sun’s surface. It introduced inert gas to the flame and constricted it though a high intensity arc, allowing their torch to cut metal like butter!

During the 1960’s, Thermal Dynamics designed and built several very high power research systems for the NASA space program. These systems were used by NASA to simulate re-entry conditions for “Project Mercury”, the very first human spaceflight program of the United States. As well as systems for other works by NASA.

1968 saw James Browning sell his interest to Bradley Dewey. Browning continued to use his knowledge of plasma to make contributions to science, while Bradley took his position in the company. Browning went on to develop the “Thermoblast” in 1977, a high temperature rocket drill that he used to pierce Antarctica’s 426 meter-thick Ross Ice Shelf in only nine hours, so that scientists could study the water underneath.

1970 brought in the first “PAK” unit-Power supply, cooling system, and console combined into one unit. After this we saw the “PAK 44” with incorporated plug-in relays, torch auto-pilot and constant current. The first gas-cooled unit was introduced in 1977, and the capacitor discharge pilot was brought along in 1979.