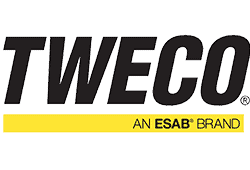 A Story Of Partnering

Back in 1936, the “Townsend Welding Equipment Company” was founded in the basement of Ray Townsend’s Wichita home, the largest city in the U.S. state of Kansas. In that same year, Ray the sole proprietor began production of the very first product, the now famous “Redhead” Ground Clamp. Between 1937 and 1939 we saw the shortening of “Townsend Welding Equipment Company”  to Tweco, and the beginnings of a national advertising campaign. Ray took his business out of the basement and brought it to a store front, he also brought an electrode holder out of the basement with him. Continued growth saw to the procurement of land to build the first Tweco factory, which was first occupied in 1940.

This coincided with the beginnings of the Second World War, which created a spike in demand for arc welding armaments, tanks, and ships, and for Tweco, one of the few suppliers. The early 40’s saw the introduction of metal arc holders, and a new line of carbon arc holders. Cable connectors with the “quick-connect” feature were also introduced. Tweco adopted one of its first slogan’s “if it goes on the end of a welding cable, Tweco makes it.” In the 1950’s, with business booming, Tweco saw the partnership between Ray Townsend and his wife Mildred Townsend, which was then converted into a Corporation with the Twonsend’s holding 100% of the stock.

When the 1960’s hit, Tweco invested in research into the “GMAW” market, with a goal to produce a better MIG gun. Produced in 1986, Tweco developed the first MIG gun that it believed matched the quality of the rest of the Tweco line-up. The new gun was introduced to the world at the 1969 AWS Welding Show.  This pushed Tweco to the top spot as the industry leader, with their highly popular gun with patented coaxial Cablehoz. Continued growth lead to yet another move, this time to Tweco’s currect location in Wichita. A facility with covers almost 18,000 meters squared over 21 acres.

Tweco’s strength continued on through the 70’s and 80’s. The most notable of events would be the acquirement of Tweco by Pacific Lumber Company (Palco) in 1981, and then the acquirement of Tweco by Thermadyne in 1987. Up to the 90’s it was reported that Tweco had sold almost 2 million MIG guns, and continued to be the industry leader in the production of MIG guns and cable, manual arc welding electrode holders, and accessories.

Tweco is a brand of the St.Louis based company, Victor Technologies International, Inc. , the world’s largest supplier of welding and cutting products.  The Tweco line is extensive as ever, with basic welding tools, up to a growing selection of products for precision robotic welding applications.

Today Tweco is the #2 globally in arc accessories and products.